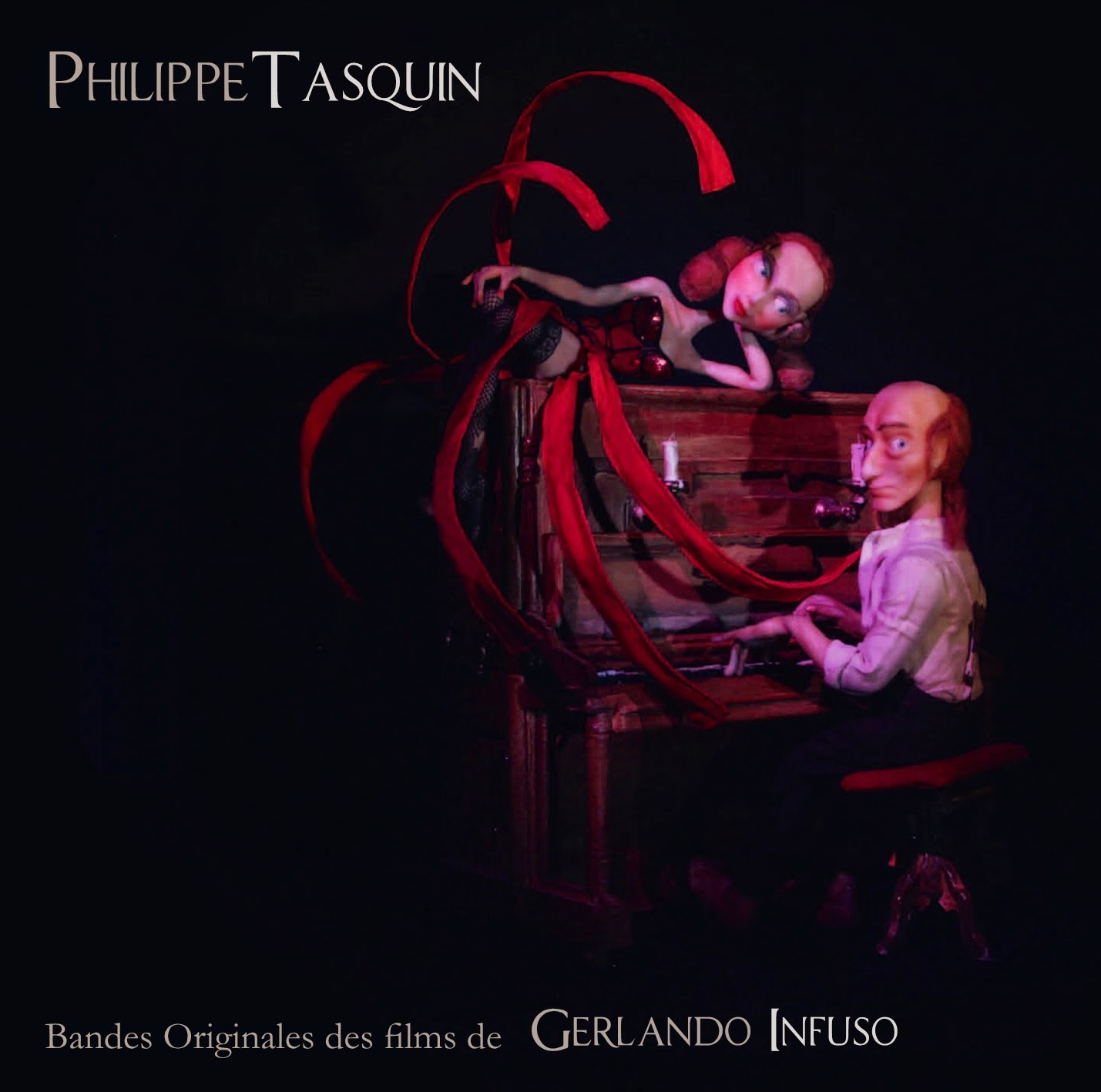 
Philippe Tasquin is a composer, musician, singer and comedian born in 1965.
He composed a dozen albums, all from improbable different musical genres like clownesque glam-rock, symphonique pop or songs with a string quartet.
He has collaborated with as many various personalities as the singer Vincent Trouble (‘Tasquin vs Trouble), producer and multi instruments Pierre Vervloesem ( soon to be re released on Off ‘My Skinny Wonderland’), stage director Charlie Degotte (various ‘Revues’ or the opera ‘Youpi’) or the singer Julie Jaroszwski (‘Furia’).
His musical style is often tinted by mystery, strangeness or concern.
He loves to use pastiche and to re conciliate the extremes: burlesque and lyrisme, severity and self-deprecating, complex and pop music. 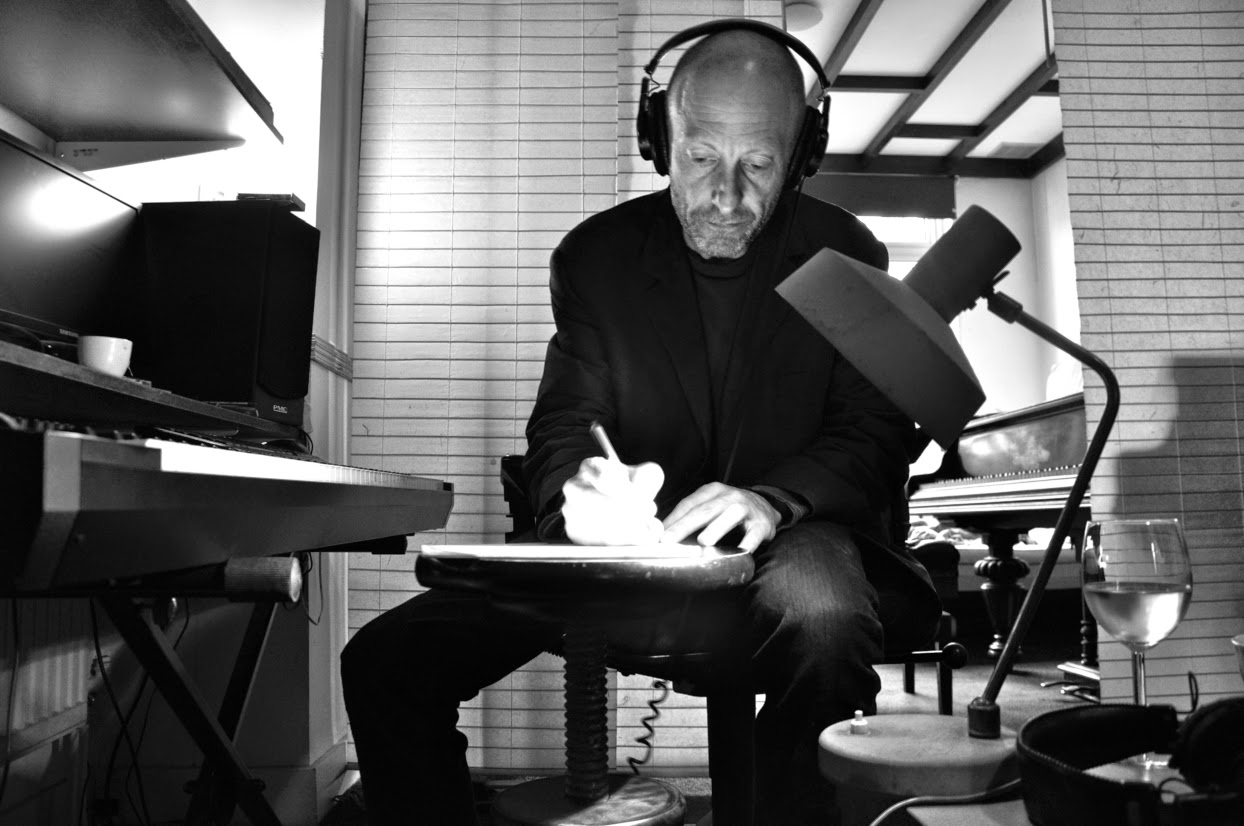 
Gerlando Infuso, born in 1986, has been studying visual arts and animation in La Cambre in Brussels.
Since then, he has forget a dark and poetic universe. His first school movie ‘Margot’ has won the junior price at the Annecy animation international festival in 2008.
In 2009, ‘Milovan Circus’ has won 14 prices. The same year, he also directed the clip of the song ‘Ange et Démon’ for the French singer Robert which was used a Givenchy parfume commercial.
2010 sees is terminal school movie ‘L’Oeil du Paon’ which will won more than 15 prices in various festivals.
2012 sees him again directing a clip for Emilie Simon.
2014 is the year of his first short movie ‘Les Pécheresses’. 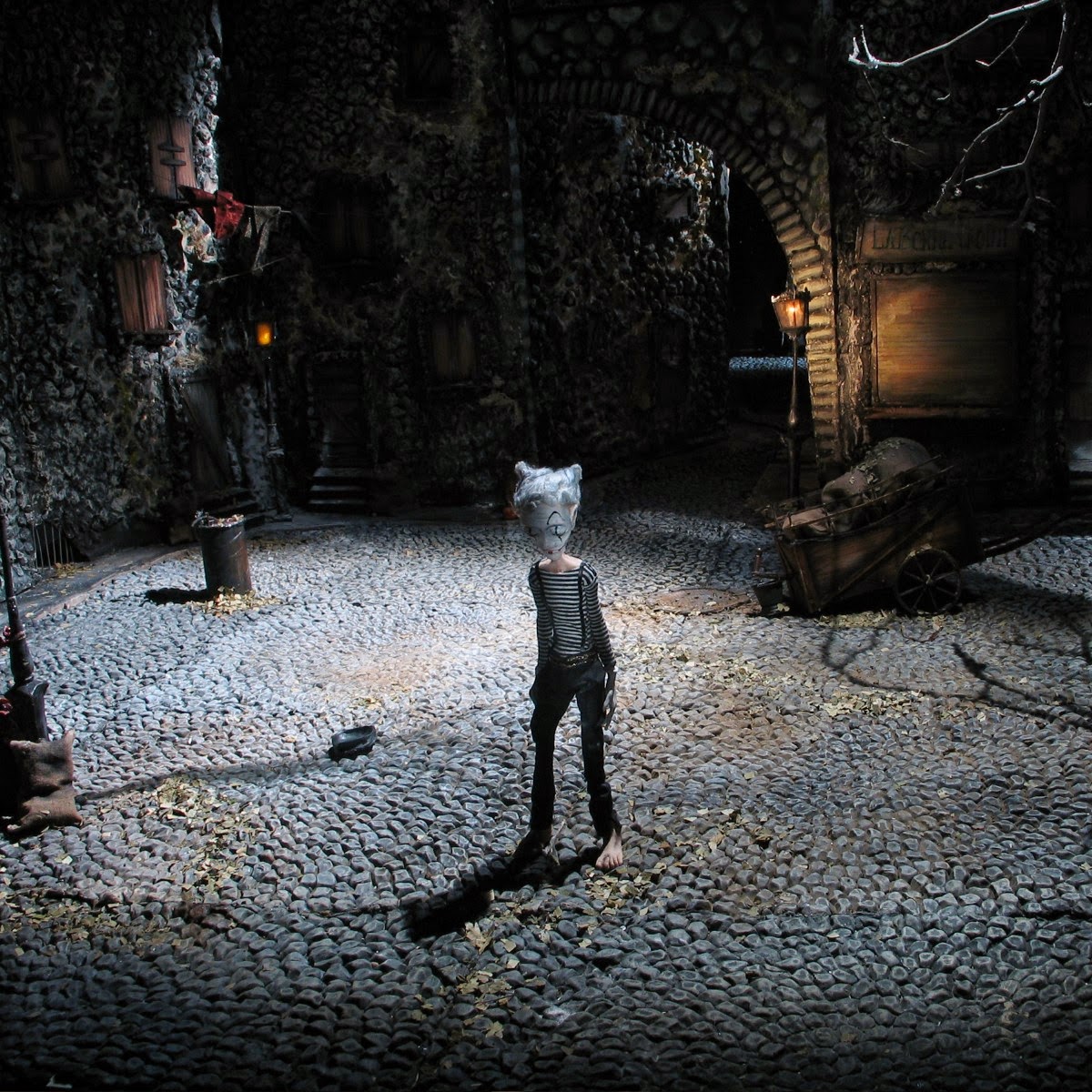 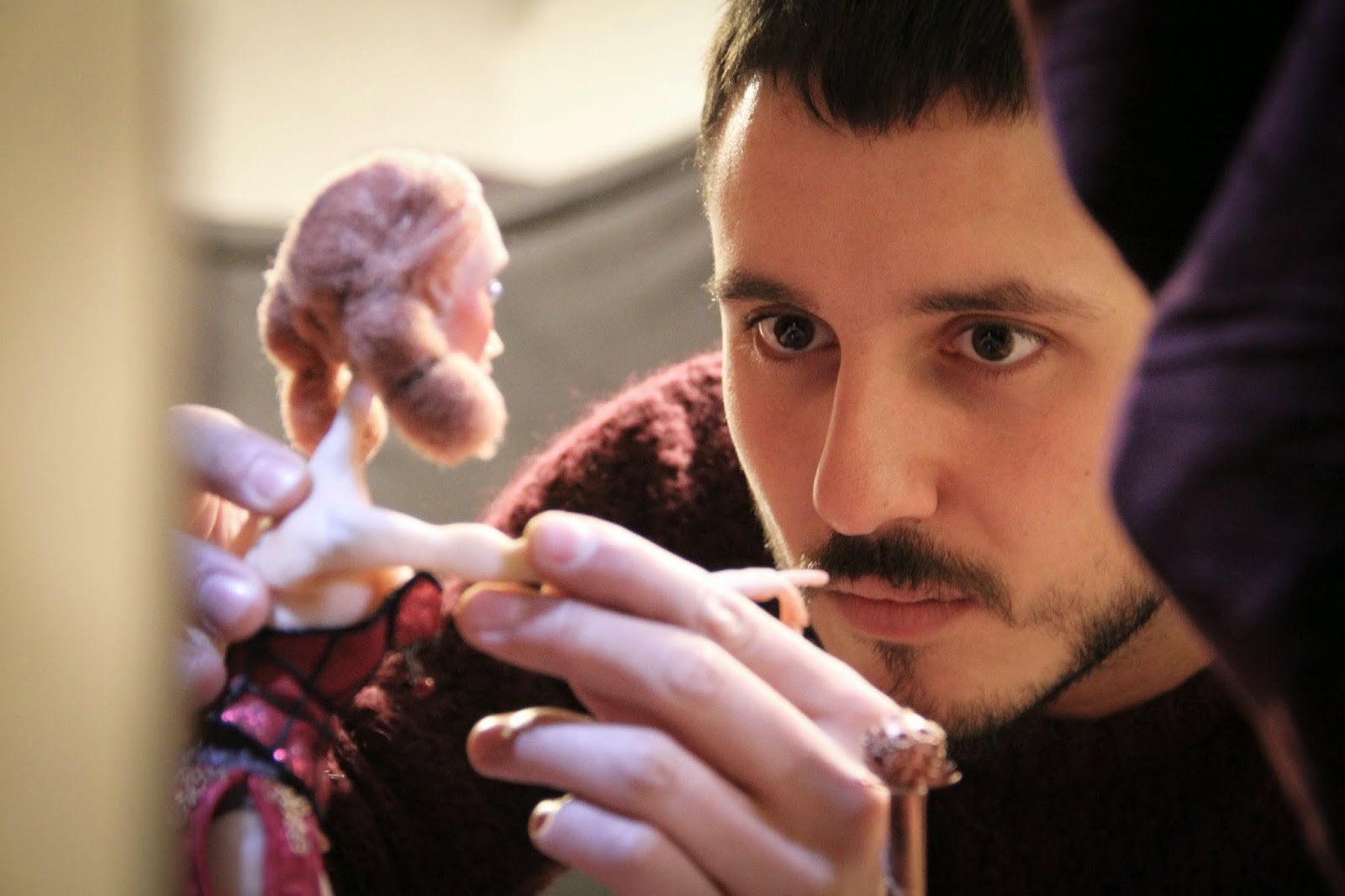 ' At a time overwhelmed by technology and the digital age, it is gratifying to see emerging and recognize the expression of the craftsman.
In the films of Gerlando Infuso , which could almost have been made ​​at the time Mélies , attention to detail , the care with every accessory , every outfit and every setting give startling results . As for the framing and staging , they are the work of both a painter and a genuine filmmaker.
I felt instantly familiar with the dark, baroque and poetic univers of Gerlando .
To create music for his  timeless and unique film represented quite a challenge, and see his creatures come to life on my music was pure pleasure.
The attentive listener may perceive here and there echoes of Bernard Herrmann, John Barry, Ennio Morricone ... I listen to their music since childhood. But I also convened among some ghosts of the past Sibelius and Duke Ellington, when needed !
So they are all here thanked and credited . '

Additional musicians:
Jean-Paul Estievenart: Trumpet on 3 and 6.
Edward Wallyn: Trombone on 3 and 6.
Julie Jaroszewski: Singing on 13 and 16. 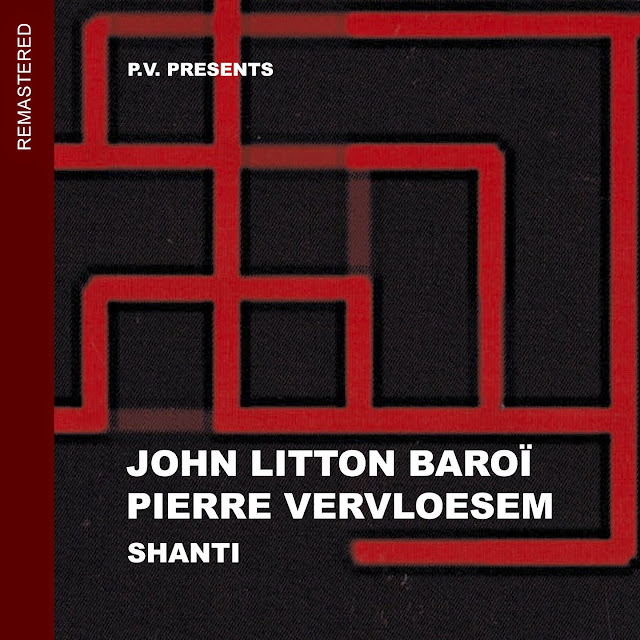 OVD011 : Pierre Vervloesem - John Litton Baroï / Shanti (Remastered)
Eighth in a chronological series of 11 digital only remastered releases (6 solo (5 augmented with bonuses, lives and remixes), 1 duo, 1 unreleased duo and 3 pots-pourris (with absolutely every tunes possible ever recorded by Pierre and never released)) and coming at the pace of one every month is the never released second duo album from Pierre Vervloesem and John Litton Baroï: Shanti (2003).
In 2001, Pierre Vervloesem (bio) met John Litton Baroï (bio) in Brussels.
The result: Zala Zala (OVD007), an album that mixes with subtlety west and east instruments, modern beats and tradition, pulse and emotion, never loosing his Asian roots.
In 2003, John came back to Pierre with new songs and asked him to arrange and produce again his next album. Only this time, he decided to sing in English to reach more people and gain a better access to the 'pop' world.
For whatever reason, the album was finally never released.
Here it is at last completely remastered.
John Litton Baroï: Vocals, Keyboards, Harmonium
Pierre Vervloesem: Guitar, Bass, Programming 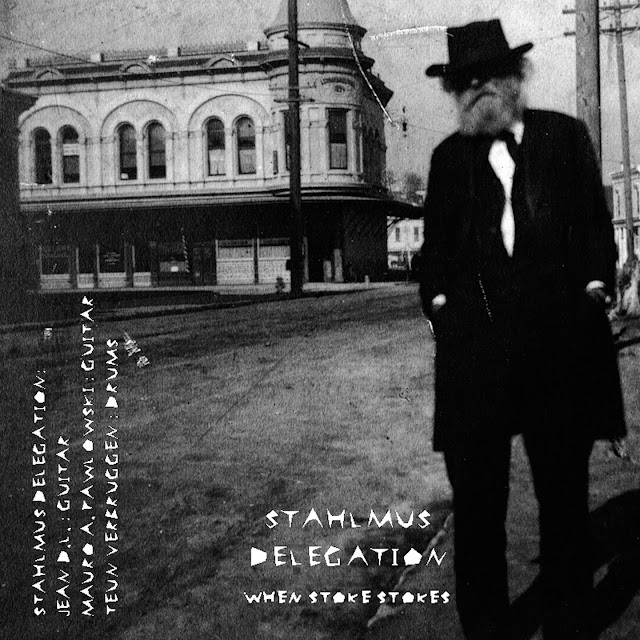 One more time, Teun Verbruggen (bio and all), probably one of the best Belgian jazz drummer in another formula!
This time joined by multi star Mauro Pawlowski (bio, home, Deus, Evil Superstars, The Love Substitutes) on guitar and Jean DL (bio) on second guitar.
This is a live recording in Charleroi.
Total improvisations, total madness, total pleasure!

Already released as a 98 numbered K7 copies (RAT029) on Rat records Here
Digital release on Off on the 15th of December 2014. 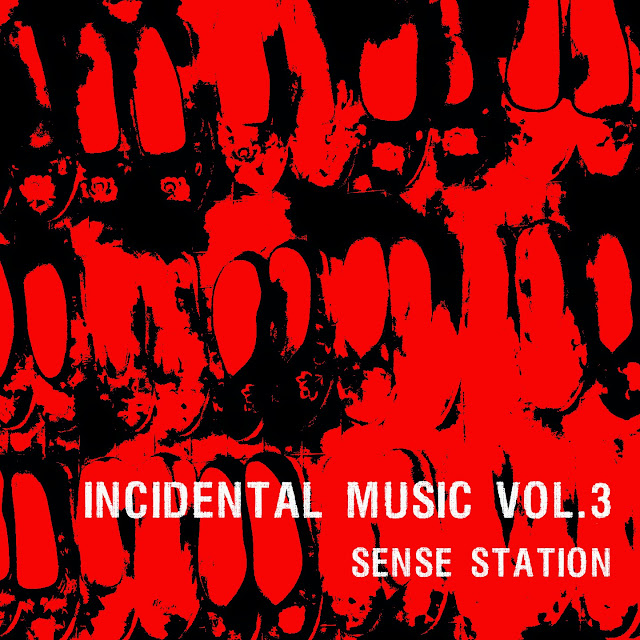 In August 2014, Off records was fortunate enough to find back K7 tapes recorded back to a 4 track cassette by Jack Ison in Cincinnati, Columbus, Toledo between 1987-1998.
Jack plays all: guitar, found sounds, drum machine, effects. It's a private work and demos, experiments and moments of sensitivity conjured from humble sources.
It refers to other worlds or dream worlds as songs, ques, excerpts, montages and loops and it is perhaps a soundtrack for kinetic art ...... music for mobiles.
Ambient music? Possibly. Interesting sounds? Definitively. Exciting tracks? Absolutely!
This is the volume 3 in a series of 3.
You can read about Vol.1 here and Vol.2 here.

Digital release only on the 8th of December 2014.