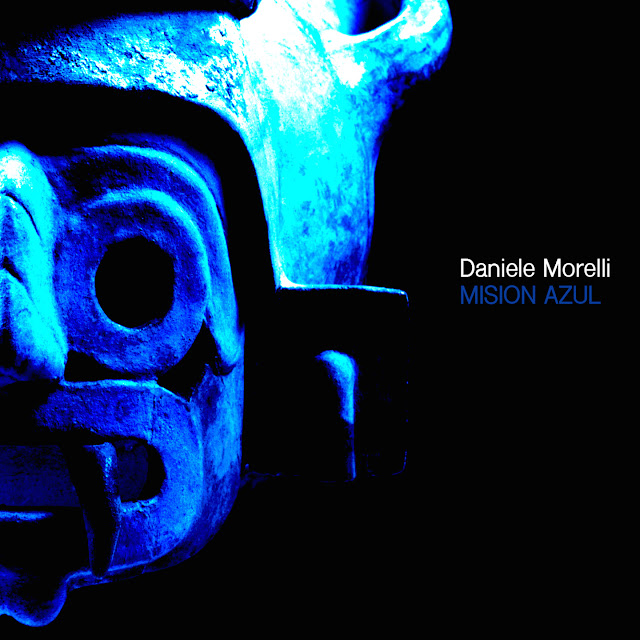 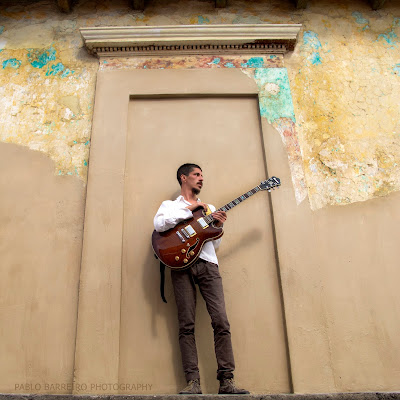 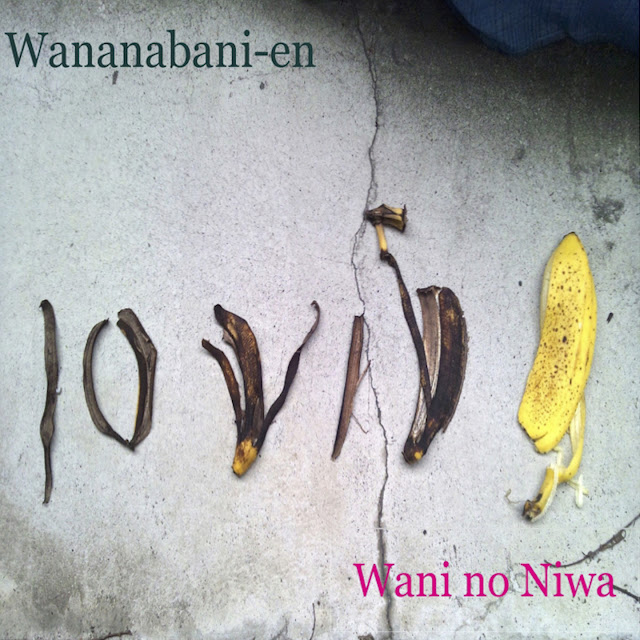 Wananabani Garden (Wananabani En in Japanese) is a Japanese experimental rock/pop instrumental combo who includes two bass guitars, drums and unique eletric handmade musical instruments Kaisatsuko and Ribbon Controller.
The band was formed in 2010 by musicians who are active in a variety of musical projects in Tokyo.
At first, they were playing completely improvised music but quickly started to compose music of their own. Their background includes rock, pop, jazz, funk, progressive, alternative, math rock, ethnic, dance, contemporary music, free improvisation and so on.
The compositions consist of poly-rhythm, irregular bars and unique melodic/chord progressions. The band doesn’t play so much chords because of their instrument characteristics.
It is, if anything, gathered monophonic lines. Nevertheless, this constraint brings their own emptyness. Their goal is to compose odd/bizarre tunes yet pop/danceable music.
In late of 2013, they completed their 1st album called "Wani no Niwa (Garden of Alligators)".
They often have gigs mainly in Tokyo.
Web Site : Wananabani-en 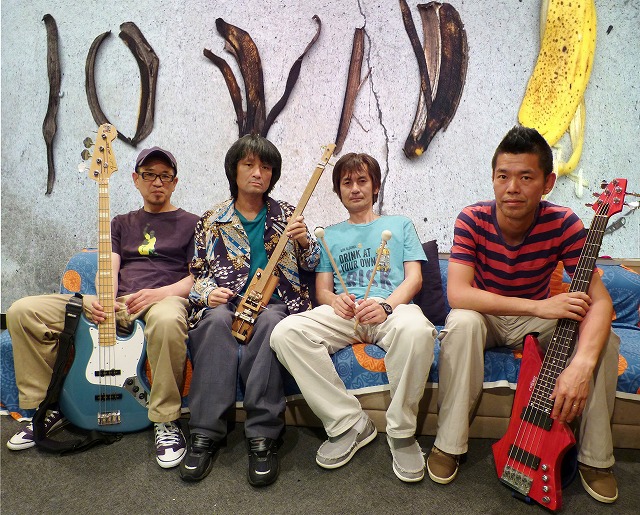 Tadashi Kumada - Drums:
Born in Kanagawa, 1964. Leader and song writer of the band. Started his musical career in early 1980's. He has played in many bands like Gal's Attachment, Copass Grinderz hi-speed, Shuttle Loop, Gnu among others. He constantly appears in the "Morgana experimental laboratory" -  an improvisation music party presided by legendary Japanese rock musician Hiroshi Higo. His compositions are often made full use of poly-rhythmic structure, but he also likes playing the drums freely in bands.

ALI - Fender Bass:
Born in Osaka, 1969. He became conscious of rhythm in a  local festival called Danjiri. In 1992, he came in Tokyo and started his musical career playing in many bands like The Skullaberrys, Deep Count and Hamonigon. In this band, he mainly plays basic bass line with conventional bass sound. His playing has brought stability to the band.

Yukiya Taneishi - 5 Strings Bass:
Born in Shizuoka, 1970. He started a career of bass player since 1990, playing in many bands like Eric Jacobsen BAND, Gnu, Time Steppers, E-unit. In this band, he mainly plays distorted/modulated bass by using many effect pedals. But he also plays conventional bass with ALI. In spite of two bass lines , their sounds superpose each other beautifully and interestingly.

Yuichi Onoue - Kaisatsuko and Ribbon Controller
Born in Tokyo, 1969. Started his musical activity since 1980 as a guitar and synthesizer player. Soon after that, he also started to develop effect units and electric handmade musical instruments. His main achievements of development are Kaisatsuko (Electric two strings original instrument) and Ribbon Controller( originally, it was made as an alternative interface of Moog synthesizer in late 60's) which are played in this band. He explores a variety of sounds and music of all ages and all world. He writes songs and plays both improvised and composed music, both solo or in different bands.

Kaisatsuko:
Electric two strings upright fiddle made in 2003. It is not performed with a bow. The rotating wheel (which is rotated by his handling) rubs strings and makes sound like Hurdy-Gurdy.

The translation of the word is as follows:
Kai = Rotation    Satsu = Rub    Ko = Oriental fiddle 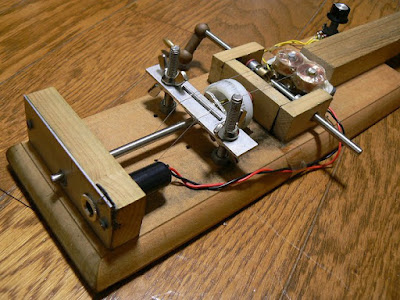 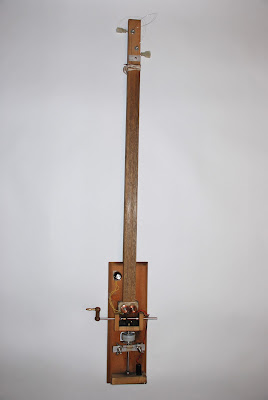 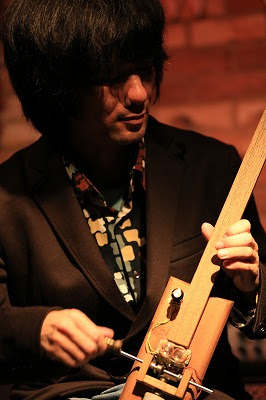 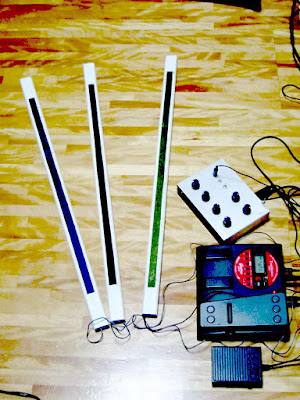 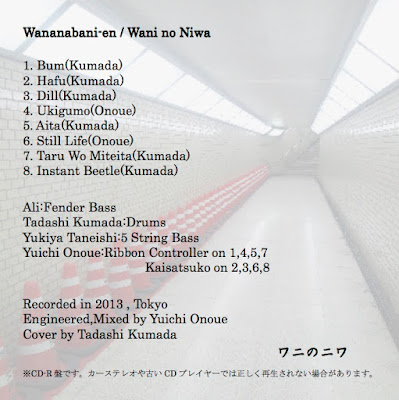 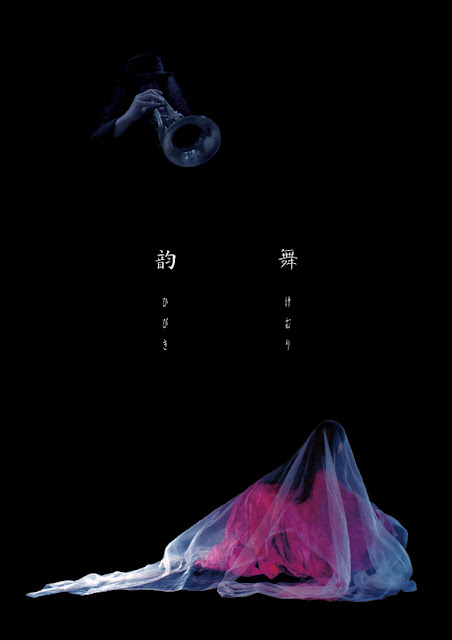 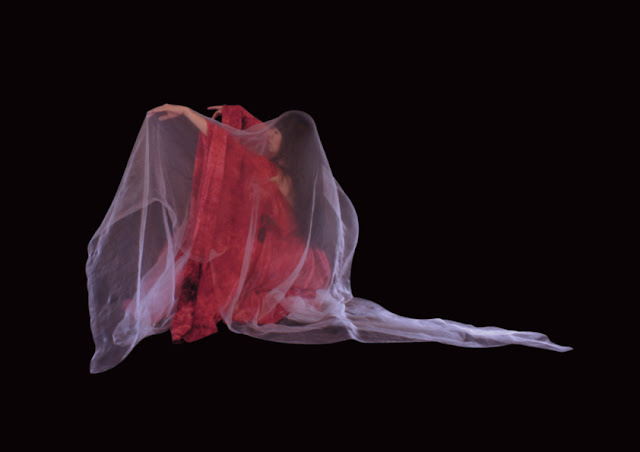