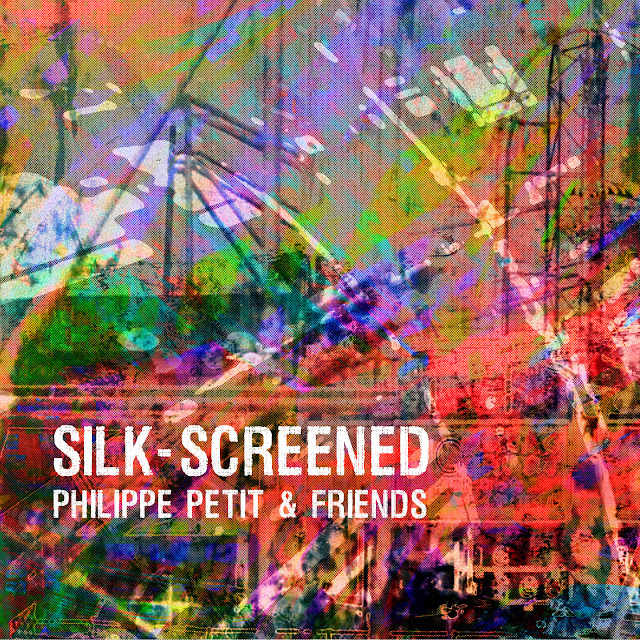 Cover art by Kiekebiche
ODG003 : Philippe Petit & Friends / Silk Screened
"Silk-screened” documents another direction from French artist Philippe Petit, whose aim ito always surprise his listeners by releasing records which follow each other while not sounding the same.
For now he is taking us in a cinematic world of dense mixtures of acoustic instrumentation and digital filtering, swaying and unfolding in ways that blend together jazz, modern classical and post rock.
Pursuing a tradition he had started with his "Reciprocess" project, given away with The Wire magazine issue 301, Petit is benefiting from the talent of many of his friends-musicians without whom nothing could be possible and emphasising that according to him music is a collaborative affair.
Philippe Petit: see bio here.

philippe petit: processed acoustics/field recordings + electronics + turntables & glass manipulations + percussions
PHILIPPE PETIT is interested in soundtracks; even if he creates original music he'd rather be introduced as a "musical travel agent" than a composer.
PETIT uses a computer to build up electronic layers, process acoustic and field recordings. To second the machine he likes to move various glasses, or percussive objects, and take advantage of vinyl material to fondle released sounds.
A journalist for various magazines and radio as well as a musical activist, PETIT has celebrated his 25th year of sharing his musical passions as the man behind the cult labels Pandemonium Rdz. and BiP_HOp.
PETIT has assembled what people call a dream-team of collaborators, working with: Lydia Lunch, Foetus, Kumo, Scott McCloud (Girls Against Boys), Cosey Fanni Tutti, My Brightest Diamond, Sybarite, Pantaleimon, Graham Lewis (Wire), Barry Adamson, Scanner, Mira Calix, Kammerflimmer Kollektief, Guapo, Leafcutter John, Simon Fisher Turner, Justin Broadrick and many more...
Aside his solo works, PETIT is active in Strings Of Consciousness, does a duo with Lydia Lunch, and his collab with James Johnston (Gallon Drunk/Bad Seeds/Faust) just appeared on Dirter Promotions.
In the works are collabs with Eugene Robinson (Oxbow), Murcof, Simon Fisher Turner, Vultures and "Cordophony" gathering music whose sound comes from the vibrations of one or several strings.
www.bip-hop.com
Pandemonium records
COLLABORATORS:
Back in the late 70s Graham Massey founded Biting Tongues, one of the first No-Wave act on Factory Records. He then became famous for his Techno experiments under the 808 State moniker, which led him to second Bjork on her “Post” album. Graham is still one of the most renowned and active musicians in Manchester and works in Homelife and Toolshed.
http://www.myspace.com/grahammassey
Hervé Vincenti plays a Fender Jazzmaster and Gretsch guitar, developing graceful notes and varied melodies. Aside co-founding (w/ Philippe Petit) Strings Of Consciousness, Hervé was also a member of Foern-Set and had played with Luc Ferrari.
Jérome Paressant is a French musician who started playing Rock and then moved on to improv and Jazz territories, founded Abraxas Projekt and Downtao
http://jeromeparessant.com/
Andy Diagram paints soundscapes with his trumpet. He blends all sorts of colourful sounds, and then mixes them in his “echo chambers” along with the help of a harmonizer. In the last 20 years Andy's unique style has allowed him to join many bands such as Pere Ubu, Dislocation Dance, Pale Fountains, James, Honkies, Frank Black (Pixies), and permanently Spaceheads, and David Thomas' 2 Pale Boys.
http://www.myspace.com/adiagram
http://www.spaceheads.co.uk/
Oldman was created by Charles-Eric Charrier after his years touring and producing albums in the duo Man. Oldman has collaborated with many artists and musicians including Mathias Delplanque (LENA), Rob Mazurek, ABRAXAS PROJEKT, The Clogs... On this recording he is helped by Cyril Secq who is also known as Astrid and releases on Arbouse, Rémi Bellin and Ronan Benoit.
http://www.myspace.com/charlescoldman
Bela Emerson is an innovative and prolific performer of electric cello, electronics, tenor viol and musical saw, who creates passionate, evocative and spontaneous music of no definable genre. As well as collaborating widely with other musicians and artists, she has four solo releases (vinyl/CD); the latest one, "Hespera" appeared on BiP_HOp to great acclaim.
http://www.belaemerson.com
Belgian vibraphonist Els Vandeweyer began her musical career on the classical path, focusing on contemporary pieces and her works have been documented on various recordings.
http://www.myspace.com/elsvandeweyer
Perceval Bellone plays saxophone, clarinet and Tibetan bowls.  He has studied electro-acoustic music, been active in improv scenes and managed to find a style both very personal and physical. He is an active member of Strings Of Consciousness.
http://www.myspace.com/percevalbellone
Raphaelle Rinaudo plays the harp, combing and messing up her strings cautiously knitting melodies that she later distorts by pulling the chords. The atmosphere thus carefully woven, cannot but convene the repressed temptation of the sirens’ song… Raphaelle also plays in the Pierre-Yves Macé ensemble whose albums have been released via Tzadik & Sub Rosa + is an active member of Strings Of Consciousness
It's been more than 25 years since Ulrike Haage had started the first European women's Jazz Orchester REICHLICH WEIBLICH and since then her piano has graced countless recordings.
http://www.myspace.com/ulrikehaage
Track listing: