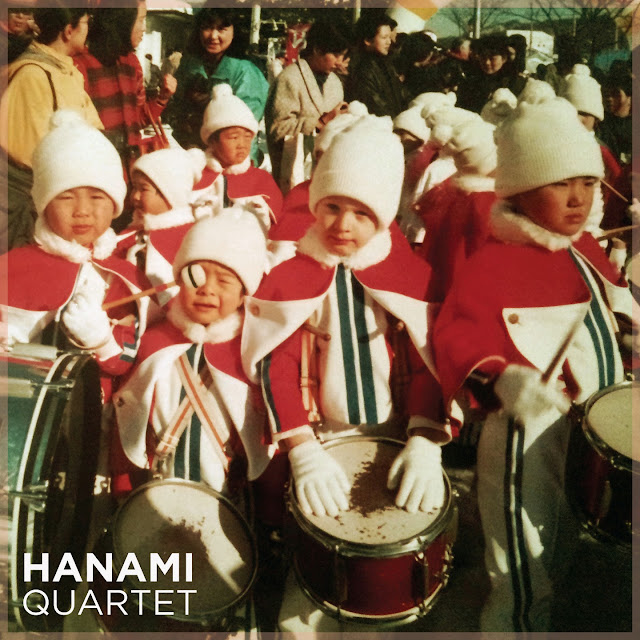 Hanami quartet includes Andrew Trim and Charles Rumback who already have released the marvelous album ' Look at Me, So I Can Get Close To you' (here).

The Hanami Quartet is the brainchild of Chicago guitarist Andrew Trim. Second boy from the right on the cover, he spent his childhood in Japan for a while and developed a love for the country.
Collaborating with Chicago saxophonist and clarinetist Mai Sugimoto, the two have been cultivating their mutual Japanese roots and infusing their favorite Japanese folk, classical, pop, and children's music with improvisation and deconstruction to draw out an extremely personal sonic experience and breath new life into a wide range of Japanese music, both old and new.
The band features some of the young veterans of Chicago's improvising scene including Jason Stein (Locksmith Isidore) and Charles Rumback (Colorlist). 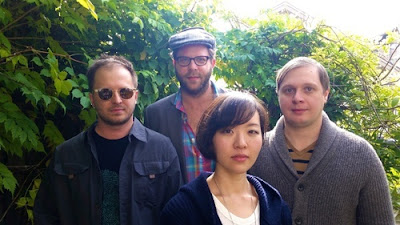 The band
A nice review in the Chicago Reader here :

Guitarist Andrew Trim and reedist Mai Sugimoto live in Chicago now, but they both spent parts of their childhoods in Japan. Following the disastrous Tohoku tsunami in 2011, they put together Hanami Quartet (with bass clarinetist Jason Stein and drummer Charles Rumback), intending to raise funds for Japan’s recovery with a one-off benefit concert. But they were so happy with that performance that they kept the project alive, and this weekend they celebrate the release of the band’s self-titled debut on Off Records. For their repertoire, Trim and Sugimoto turned to the melodies they grew up with in Japan—children’s songs, Japanese classical music, and pop tunes made famous by Kyu Sakamoto. Some of them sounded familiar to me too, and after Trim provided some background, I realized that the 1961 Sakamoto smash “Ue o Muite Aruko” had become a top-ten hit in the U.S. after A Taste of Honey released it as “Sukiyaki” in 1981. The charged performances, which exploit contrasts between the instrumentalists (soft and loud, smooth and rough), create a tension that counterbalances the frequent sentimentality of the melodies. Rumback reveals the influence of Paul Motian more explicitly than usual, bringing a rumbling bottom end to his playing, and Stein and Sugimoto’s intertwined lines toy with a delicious sour-sweet dichotomy. Trim’s lovely underwater guitar tone softens the edges of his lines but retains a gentle bite, and he juggles two roles, sometimes playing harmonies and sometimes bass lines. He also solos occasionally, as does Stein—but where the guitarist is tender and lyrical, the bass clarinetist is biting and furious, especially on “Sakura Sakura,” where the group all but abandons the safety net of chords and keys to give him free rein. —Peter Margasak
And another one in Wondering Sound by Dave Sumner here:

Formed originally in the spirit of raising funds to aid Japanese victims of a recent tsunami, this quartet of guitarist Andrew Trim, drummer Charles Rumback, multi-reedist Mai Sugimoto and bass clarinetist Jason Stein enjoyed their project enough to eventually put together a studio recording. This cerebrally inclined modern jazz take on Japanese songs is wonderfully engaging, a potent mix of sonic fluency and cinematic ambiance. Even when a song grows increasingly volatile, there’s always a comforting lullaby nature to it. The more I listen to this recording, the more strongly I feel about it. Outstanding. Highly Recommended.
Released physically and digitally on the 5th of September 2014.
Cd is a limited 200 copies edition.

And in the rest of the digital world: