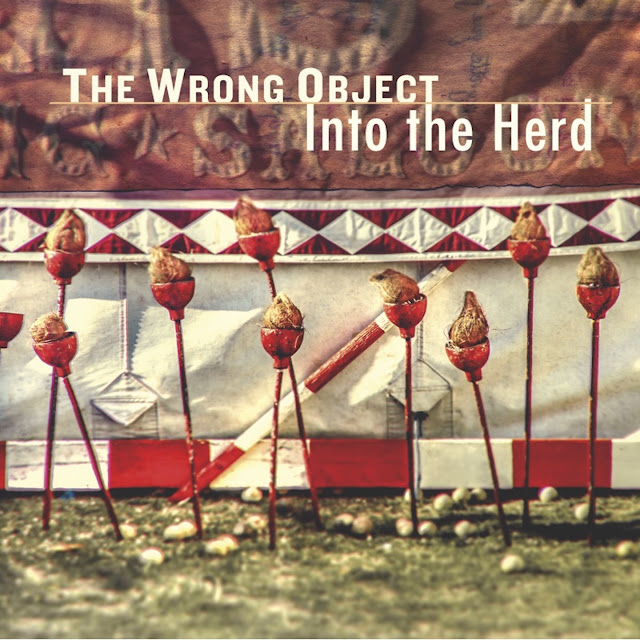 Zachary Nathanson: "Listening to their new album, I almost get the feeling that Michel Delville, who launched the band back in 2002, hasn’t forgotten his roots. The Wrong Object are still going strong and they’re showing no sign of stopping... From the moment you listen to the opening title-track and Mango Juice, you can tell that Michel channels the styles of Brian Godding (Blossom Toes, Magma). From Pierre’s wah-wah bass introduction, you can tell that the band are going straight back into the Egyptian’s tombs of Emehntehtt-Re to see where the missing clues are hidden. The snarling tones that Delville brings into the opening composition is almost a revelation on what secrets the Egyptian king has hidden from every historian buff ..."

Pete Pardo: "Easily an early contender for jazz-rock album of 2019, _Into the Herd_ is a musical joy from a supremely talented band at the height of their powers"


Duncan Heining, Jazzwise: "Suppose you've a friend, who thinks jazz-rock an aberration and fusion noodling its inevitable nadir. Here's what you do. Strap them to a chair, put The Wrong Object on at full volume and leave them a few hours. If by then they still don't get it, find another friend."

Barry Cleveland, Guitar Player: "Belgium’s The Wrong Object is brimming with artful compositions and quirky guitar work. Originally a Zappa tribute band, guitarist Michel Delville and his colorful cohorts have pushed the quintet’s music far beyond homage status, into an oeuvre combining structural complexity with emotional authenticity, much as their mentor’s music did."

Kev Rowland (NZ), Rog Archives: "It is as if Frank Zappa and Robert Fripp have pulled together a band so they can explore not only their own musical stylings but also combine it with the Canterbury Movement and then thrown in avant garde jazz and even some RIO just for the hell of it. After 15 years of an existence marked by extensive touring, recording and numerous collaborations with international jazz and rock luminaries (Elton Dean, Harry Beckett, Annie Whitehead, Alex Maguire, Stanley Jason Zappa, Ed Mann, Robin Verheyen), The Wrong Object continues to push boundaries and blend different musical styles in a way which is both invigorating and exciting."

Since its creation in 2002, The Wrong Object has been hailed as one of the most original and powerful bands on the progressive jazz-rock scene.

Into the Herd is the band’s seventh official release (their first one was a collaboration with Soft Machine’s Elton Dean which appeared in 2005).
Merging jazz, rock and classical sensibilities with samples and electronica, influenced as much by Stravinsky and Bartok as by Gong and Zappa, the Belgian sextet continues to expand its vision of intriguing rock and jazz expressed in exuberant shifting accents, superb melodies, contrapuntal complexities and colorful arrangements.
The result is a new opus of thundering monumentality, whose artistry and sound remain unmistakably their own and create a diverse and vibrant listening experience, one which has become well-known in jazz-rock and progressive rock circles and which All About Jazz describes as a mixture of “spunky world-music interludes, outside jazz treatments and scorching movements amid majestic, prog-like escapism”.

With a line-up comprising members of seminal acts such as Univers Zero, Machine Mass and FlatEarth Society, Into the Herd is one of the Wrong Object's most accomplished releases and arguably their strongest offering thus far.

All tracks recorded by Maxime Wathieu, mixed by Etienne Plumer and mastered by Mark Wingfield.

Physical and digital release on the 22nd of February 2019.


The Cd is Sold Out!